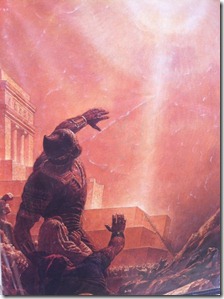 When I was planning our Cancun vacation, my wife was thinking… we’ll chill on the beach at an all inclusive resort, and I was thinking… we’ll grab a rental car and pick up as many of the Mayan temples as possible within a 2 week period.  Finally I can see one of the 7 finalists of the new 7 Wonders of the World – Chichen Itza.  As a traveller I was anxious to see real wonders of the ancient world. I love temples, I love archeology, and I love the mystery that surrounds these massive new world temples. I also was incredibly interested in Tulum on the coast, and my ultimate Tikal the Mayan Capital.  We know so little about the Mayans, but I was surprised to find out they weren’t totally wiped out.  There is a group of Mayans that give the tours in Tulum, and they speak the ancient Mayan language.  It’s so, so sad that the culture has so much of who they were.  They lost everything.  A few documents recently were rediscovered in Germany referred to as the Mayan Dresden Codex. 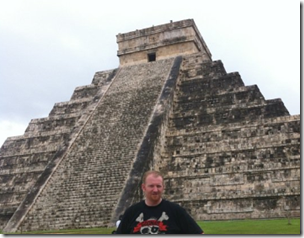 Which some point to as the source of the 12, 21, 2012 apocalyptic date or the beginning of 1000 years of peace, but “A German expert who says his decoding of a Mayan tablet with a reference to a 2012 date denotes a transition to a new era and not a possible end of the world as others have read it…The interpretation of the hieroglyphs by Sven Gronemeyer…He said the inscription describes the return of mysterious Mayan god. Continue reading on Examiner.com German Mayan researcher’s 2012 conclusions.  Cool.  Beginning of the end of the world or return of a Mayan god… Bearded white god?  (By the way, ask to see the rock carving of the bearded god at Chichen Itza.  It’s pretty cool.  If it’s Lief Erickson or Jesus or insane stone carver it’s mind numbing given the carvings all around it.  Seriously fun stuff.  You gotta enjoy the speculation and not get too caught up either way, since we can’t know.

While I don’t think the end will happen in December 2012 (No one is suppose to know the day or hour when Jesus is coming back Matthew 24:36), I have used it as an opportunity to be prepared for disaster.  In my church, we have been asked to have a year supply of food on hand in case of disaster.  It has paid off with members all over the world.  As recent as the tsunami in Japan and earthquake in Hati, the members who obeyed have been blessed. As a member of the LDS Church there is a fascinating Book of Mormon back story of Christ in the Americas and Artists often paint pictures of Christ appearing to the righteous people in 3 Nephi 11 with the back drop of Tulum.  There are Mormon tours all over this region.  In fact we discovered that more

than 30% of the guides in Tulum were Mayan members of the LDS Church.  It’s understood that there really hasn’t been any LDS revelations on the locations, and anything discovered is purely speculation.  Our guide at Tulum was actually a Mormon Bishop named Mosiah.  It was a quick tour, which really didn’t add any info on what we had already got from our tour in Chichen Itza.  He shared pictures of Tulum where light shines through specific building on April 6th, and sold us a tree of life medallion.  Great stories.  Amazing place.  While I didn’t necessarily subscribe to all he shared, I was fascinated with the history of the Mayans, he being one himself.  The PC accepted story is that Mayan calendar simply points toward a new era.  Great.  Others are looking for the Age of Aquarius.

These grandios temples are mucho bueno.  Very incredible.  Left: My trooper, Dean at Chichen Itza.  This is 3 of 7 New Wonders for him.  He’s been to Machu Picchu and the Great Pyramids in Egypt.

Travel Tip: I do recommend highly recommend seeing Chichen Itza.  I do recommend getting a negotiated tour there.  There are some inscriptions and history that you’d miss otherwise.  There are a lot of things to point out in the area.  There are half a dozen buildings and a great ball court area, and you need to know more about the rules of that game and what happens to the winners and losers.  Those stories you must hear.  There’s a lot of inscriptions and interpretations and stories you need to hear.  We got the 2 hour guided tour, that we negotiated on the spot after we arrived.  It wasn’t too outrageous.  There are a lot of people that can give tours, so shop around and negotiate.  Don’t take the first rate you hear.  Many hotels in Cancun can arrange transport and tour as well.  Just don’t over pay.  There is a lot of cushion.  In relation to Cancun both Tulum and Chichen Itza are both day trips. There is a toll road all the way to Chichen Itza from Cancun. You’ll pay 20-30 USD for that trip one way! We decided we’d take the scenic route on the way there, and hurry back. It is a difference of about an hour. You can get to other ruins as well including Coba. I didn’t make it to Coba, we were with my wife’s family and Jeff got sick, so we missed out on that one, but that’s ok because my eye was on the ultimate prize of Tikal, Jaguar temple the largest temples in the new world.  In contrast to Chichen Itza, I do not recommend the tour in Tulum.  The buildings are a lot smaller, things are close and if you did this one after doing Chichen Itza there’s a lot of overlap.  Our tour may have ultimately been 15 minutes of explanation and he didn’t even walk the whole thing with us.  Don’t miss the views from either side of the temple near the water.  There are some great photo shots by of Tulum by the water.  Another reason to do your research of Tulum ahead of time and get the guided tour at Chichen Itza.