I’ve visited South Africa on three different occasions and found it incredible each time.  I would go at the drop of a hat.  I still need to take my family with me, and yes if you were wondering.  I would do that.  Something that holds a lot of people back is they are sincerely worried about this world we live in and they see Africa as a whole as a place that isn’t safe or ready to be explored.  In my various adventures in Africa I’ve found South Africa to be a great hub to explore other parts of South Africa.  It does feel like that hut surrounded by barbed wire that protects me from the wild animals like in Kruger wild animal park, but then I realize I’m the one that’s in the cage. 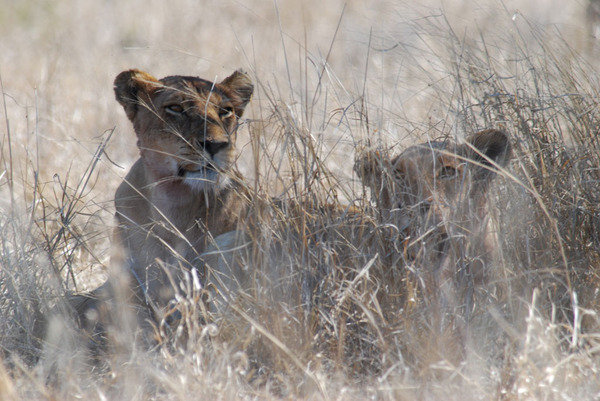 After you’ve been to Africa and been on safari, a zoo will never be the same.  As I suggested, you are the one that’s in the cage.  During the day you venture out in your car, and in our case it was a rental car with insurance.  Our little car was chased by bull elephants a couple of times and we drove through herds of buffalo, zebra, and numerous horned antelope and other horned beasts.  Before nightfall we’d drive into a gated area that would keep the wild animals out.  We’d share stories with others and see what large animals had been spotted. 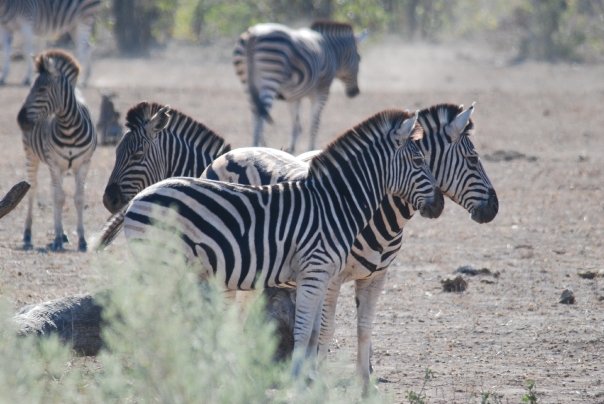 The big 5 are on everyone’s mind.  You have to see what of the big 5 you can check off.  In our 3 days of driving around never once crossing an existing path, we saw them all but the leopard.

Why it doesn’t include the Crocodile, the Hippo, Hyena, Giraffe or Zebra or other animals that are just as huge I don’t know, but I did see them as well.  I’d also recommend tracking down a troop of baboons.  It isn’t enough to just see one of these animals, you need to see them in hundreds and it again changes your perspective. 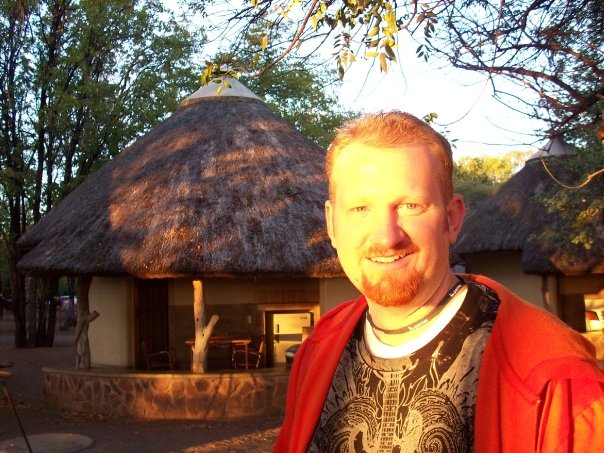 Kruger Wild Animal Park is a must.  If you visit South Africa you should definitely plan to do it.  There are other less wild parks where you can get closer to the big cats, but the wildness of it all will change your perspective forever.  This is the Yellowstone of wildness for Africa.  I later spent some time in Botswana that made me rethink what I thought was wild, but really this is a great introduction into the wilds of Africa.  As well having spent some time in Kenya and Tanzania, I think this is a great place to start.  Tons and Tons of animals and you can do this on your pace.  They’ve even got maps that point out the climates and what to expect in the various ecosystems. 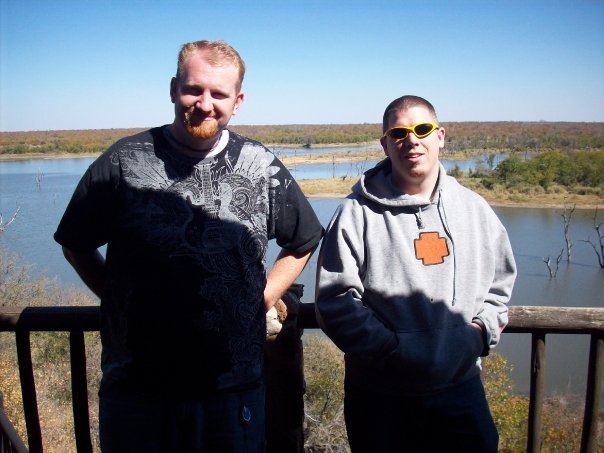 Eric Harlan, a Microsoft engineer and I ventured out into Kruger with his massive camera and a very expensive rented lens that made the far off animals seem within reach.  It was Eric’s first foray into the wild, and he to this day refers to the changes that took place on this trip.  Not just the animal wild and crazy, but our walking border crossing into Mozambique to Maputo.  An incredible experience I’ll have to share in another post.  Eric and I have since been on a few other trips, but Kruger stands out.  We flew into Johannesburg, stayed with a good friend in Joburg.  The next morning we rented a car and were in a hut in the park that night.  It was a good drive and we barely made it before they closed the gate, but it was a beautiful drive.  After 3-4 days in Kruger we went into Mozambique and got the human side as well as in Swaziland before arriving in Durban where we did our speaking gig at TechEd Africa before flying to Capetown for the first SharePoint Saturday event in Africa… 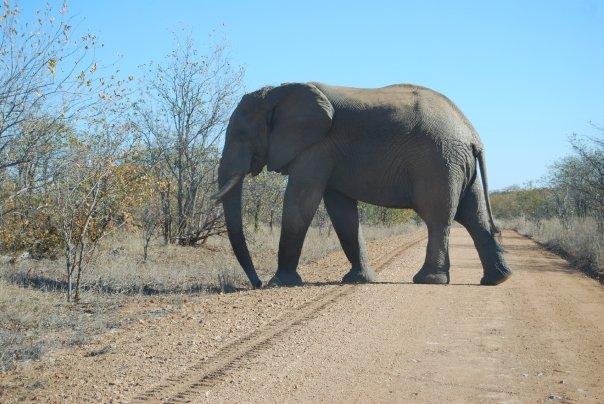 If you want to go on a guided safari you have lots of options.  First you can take a guided tour and they will track down the animals for you.  As well, you can take your vehicle into the park and at each of these self enclosed villages that often include bungalow, or beehive huts, and more primitive tent spaces.  You decide how primitive you want to go.  At these places you can pay to go on a morning or evening walking tour, or go out on a safari on a huge truck that can go on special routes and get quite close to a watering hole, or a night safari that has exclusive access to the routes during the dark.  They are all freaky and I highly recommend them all.  Each of them is a real experience… having a guide with an elephant gun in the front and one in the back… and walking through grass thinking wasn’t that a lion roar and it was, is truly exhilarating.  Very raw.  We tracked down some rhinos grazing who eventually smelled us and ran off, but not before we were about 10 feet away… and followed some buffalo and zebra.

When you stop for lunch at one of these rest camps you can eat gazelle or other meat that you’d never thought possible didn’t think you’d ever eat Wildebeest. 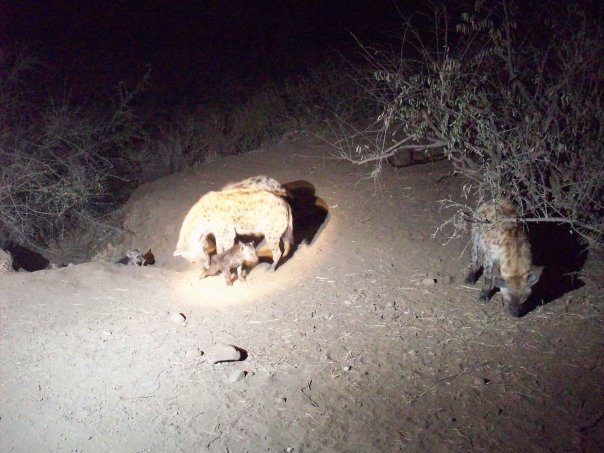 At night we tracked a lion, a bull elephant who pushed our safari truck, and spotted a family of hyenas with tiny little 3 babies.  Incredible experiences.  It was amazing to see these animals in their habitats on their terms. 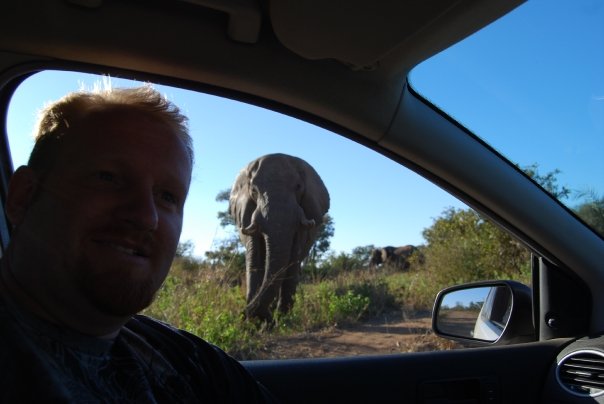 It’s unreal when you see a HUGE elephant looking straight at you and there’s nothing more than a little metal or tiny little glass window between you and them.  On the walking safari, you feel very vulnerable.

Do I recommend these experiences.  Oh, definitely.  Is it safe, you’ll have to ask your guide what his stats are.  These are experiences of a lifetime…

Above is a video of footage from my camera mixed with some photos that Eric took.  He snagged the lion photo as well.  Getting that lion photo was a real experience.  We had gone two days without seeing a lion, and we really wanted to see one.  On our maps we tracked down the area where we should see one, and asked as well around camp.  We saw a car that was stopped and pulled up quietly behind it.  A man in the car had a camera pointing into some tall grass.  We must have sat there for 5 minutes before we saw a tail swish and realized what we were waiting for.  A group of lionesses were sunning.  Over the next half hour we’d get nearly out of the car (not recommended and anything more would be against the rules) to get the best viewpoint.  All of a sudden they jumped up looked around… (maybe smelled us?) and then ran off.. it was beautiful and an experience I will cherish.