I’ve been to California many many times, but it wasn’t until I explicitly planned to go to Yosemite that it happened.  I’ve seen pictures, and heard stories about it’s beauty, but it never popped until this summer.

Our family had a family reunion in Lake Tahoe, and with an open weekend, it took a little convincing, but we were all in.

I knew I wanted to have a full day in Yosemite and not just plan to drive through.  This was smart.  You really do need to plan to spend a full day to take advantage of what is there.  Imagine Yellowstone or the Grand Canyon… it’s one of those type of places.  You’re essentially 3-4 hours from civilization in any direction.  The good news is, there are options, but planning is important.  I found that common travel sites would easily put you 2 hours away from the park when booking a hotel, so you have to be careful.  The hotels, motels and lodges in the park go quickly and are quite expensive.

We stayed at the West Entrance to the park at Yosemite Riverside Inn.  It met our needs, and even included breakfast.  We were most happy with the distance to the park and being able to wake up and begin our journey into the park.  The first sight of Yosemite valley was incredible.

Half Dome in the Distance… My first view of it. Inspiring!

Personally it only took this one view, to know that I had found what I was looking for.  Yosemite was a natural wonder.  This was an ancient canyon with God’s fingerprints on it.  This place has serious earth history and a magical valley that would attract earths inhabitants all over it.  This special valley would awe and inspire and enchant anyone who sets their eyes on it.  In many ways simply traveling through this valley can bring one closer to God, because it makes man feel small.  In so many ways the pride of man can be stilled by standing on one of these rocks.

El Capitan – What a Serious Megalith

While I didn’t really take the opportunity to climb these mega stones carved out of the valley, I did spend hours driving around them and went on a couple of easy hikes up to the falls, and one to a lake.  I spent most of the day in the valley with a bunch of other people I was trying to ignore.  You can see a few of these insignificant creatures in my picture.  Ignore the crowds, it’s still worth it. There are times of the day when you can get there ahead of the crowds, but still you have to do it anyway… It’s amazing and it does bring one closer to ones creator. 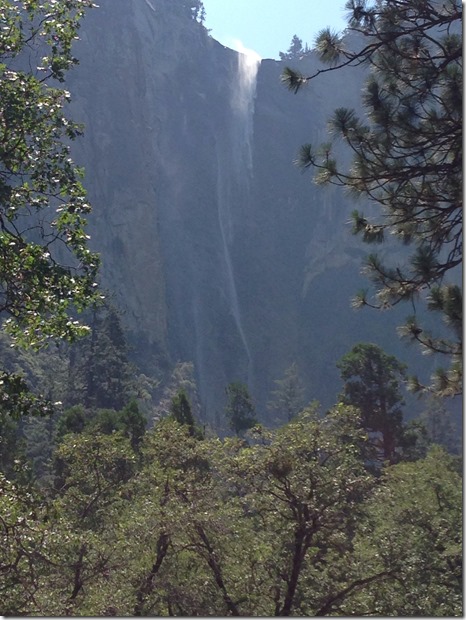 Yosemite Falls is 2,425 ft.  The highest waterfall in North America and in the top 10 in the world.  I’m going to be visiting the highest in the world, Angel Falls, in Venezuela and planning to spend 3 days to see it.  Had I known how amazing this was and how many of the top waterfalls in the world are in this park I would have given it more priority.  When I think of falls in the US, I think of Niagra, but that’s a volume thing.  Here you can plan to go when the run off is at it’s highest in the spring and get a real show.  Remember this park reminds man, that he is insignificant.  Some people get hurt or worse, trying to prove they can conquer these things.  With over a dozen falls, and hikes to nearly all of them, there are tons of things that people will do.  I would have liked to have tubed the river, or rode horses… lots of great activities in the park.

If anything Yosemite reminds us that there are things bigger than us in life.  Anytime you want to feel small. Visit the Yosemite Valley and it’s 1000 square miles of National park.  While you may feel like you weren’t alone while you were there.  You won’t regret it.