Bali is clearly one of the most beautiful islands in the world.  Beyond that the people and the culture there is the richest I’ve found in all my travels.  The people are so humble, so nice, and so culturally rich.  I had the chance to witness a Balinese wedding.  Bali is far from where I live, and yet I still feel a very strong longing.  I find there’s a real peace tangible there.  Life in Bali is simple.  The word simple doesn’t do it.  It’s something much more pure, it’s not about how rich you are, it’s not about how smart you are, you feel that it’s not about judgment either.  It’s more about understanding sincerity.  It’s about being true to yourself, and respecting others.  I understand why Eat, Pray, Love ends in Bali.  The protagonist really finds something about themselves that they couldn’t find otherwise.  I don’t care if you liked the movie or thought it was long and boring.  The beauty in Bali in the movie was great, but what you really didn’t get to fully realize it there is something about it.  Something special there.  I hope I can covey a piece of what I experienced. 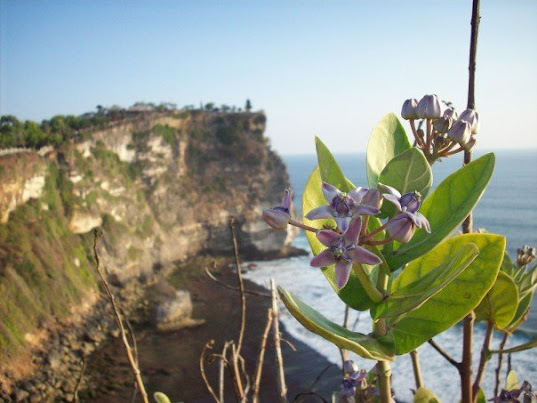 When I arrived at the airport in Bali, I was already feeling very relaxed.  I hadn’t decided yet how I was going to get to my $6 hostel a block from the beach in Kuta.  I was still at the airport, looking for some wifi when I was sitting in some little café when I noticed a young girl was staring at me.  I’d look back and she was really staring at me.  I smiled and she smiled back.  It was great.  I think I figured it out.  I was strange to this young girl. 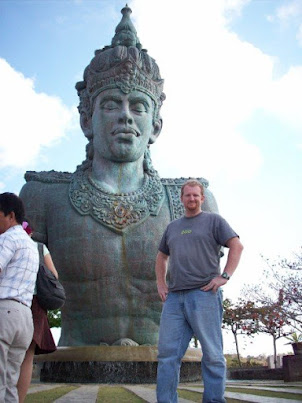 Later on, my first stop of my personal tour.  In fact I hired a driver from the airport to take me to my hotel, drop my stuff and then we’d go visit a large torso statue.  While I was taking pictures, a man approached me and asked if his daughter could take a picture of me.  I was a bit shocked, but remembered the girl from the airport.  Sure.  I replied and handed him my camera.  The girl took a picture, but didn’t seem ok.  I asked what was wrong.  He then explained she wanted to be in the picture with me.  She then approached and was much much happier as she stood next to me and her father took a picture of her.  This would repeat itself multiple times, and in other parts of Asia.  I have learned to embrace it.  It’s gets even better when I have my kids with me.  It’s much more “lucky” to have pictures with my pale skinned kids.

Now let me tell you about Kuta.  Kuta is known for it’s surfing, it’s a great tourist town, great shops, relaxing atmosphere, and it really attracts the tourists.  Lots of Australians, 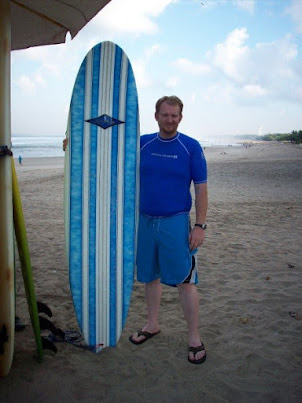 lots of Japanese, and Koreans.  Kuta is becoming more of a resort area.  Most of the hotels on the island are in Denpassar, Ubud and Kuta the beach suburb.  Ubud has everything a tourist could want minus the beach, which is why Kuta is popular… the great beaches.  Bali is a very cheap place to learn to surf.

The south end of the island is Uluwatu.  An incredibly beautiful Hindu temple on a cliff overlooking an amazing rocky shore.  The sun begins to set and monkeys run around.  A troop of monkeys including itty bitty little monkeys. 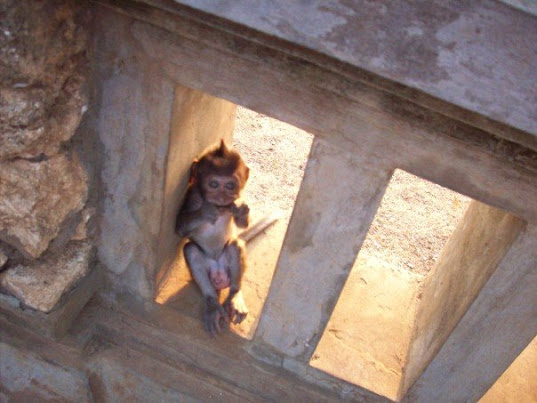 I was walking around, soaking up the sun and taking some video when this little monkey jumped onto my shoulders.  I was taken by surprised as he treated me like a fellow monkey and started picking at my hair, face, and ears.  It was then he started climbing down my arm to check out my camera.  He was really getting quite comfortable, and I was definitely enjoying it when I started walking and he got freaked out and jumped back off.

Big surprise on both parts.

Monkey jumps on my shoulders and starts picking my face, and pulling my ears.

It was so amazing.  Incredible experience being able to interact directly with the monkeys.  You do have to be careful as the monkeys will try to steal your camera or glasses. 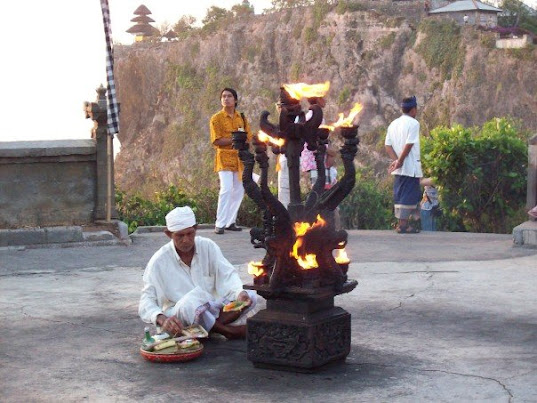 In the distance you can see the stupas.  In the foreground a man gets ready for the Kekak dance which will happen here.  This dance is a mix of spiritualism, ritualism, and story telling in a very colorful display.

Monkey King in a Ring of Fire

Above: In this particular instance I’m filming the fire dance.  The monkey king is mediating as fires rage around him.  He wakes up and begins dancing, jumping over the fires of straw.  He kicks some of it away from the crowd, but in his trance he miscalculates and kicks the fire into the crowd. 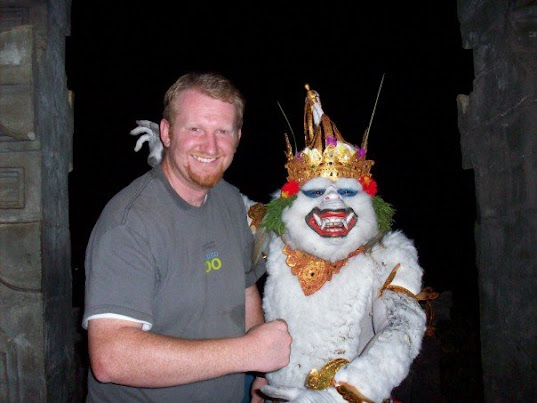 If you look closely at his clothing in the picture you can see this his arms are singed.  After, I heard one of the people that was burned say it was a bad burn.  I had wondered if this had happened very often.  Others speculate on the YouTube video that with the noise of the crowd and the trance there was little that could be done. 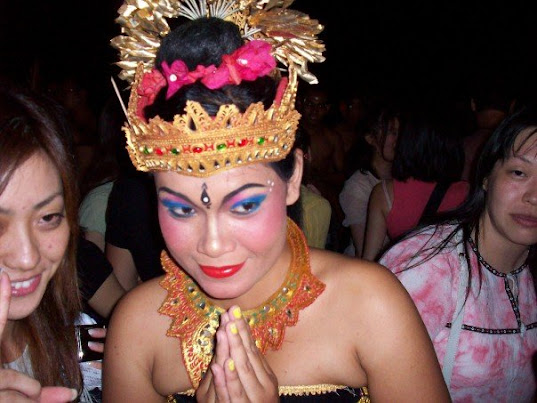 The characters will dress in beautiful colors and the dancing is so beautiful. The story is a from scripture, and has been told for more than a thousand years. On the island, many of the paintings, art, and carvings, tell this story. The hero, the Monkey King.  There are many ways to represent the dances around the island the Barong dance, the shadow puppets, the Kecak dance.

I hear much of what happens in the play is to tell a story, but to teach the people of good and evil.  It teaches of karma.  Karma is something I learned more about in real life in Bali than anywhere else.  It’s similar to the Christian… do unto others as you’d have them do unto you.  Karma provides that bad things will happen to you if you do evil, and if you do good things good things will happen to you.  It is carried a lot further in the Balinese society.  Many on the island feel like the Bali bombing was as a result of the hearts of the people.  That it was a punishment.  Not just to the foreigners who were killed, but it brought bad karma to the island.  These evil people brought a bad spirit. 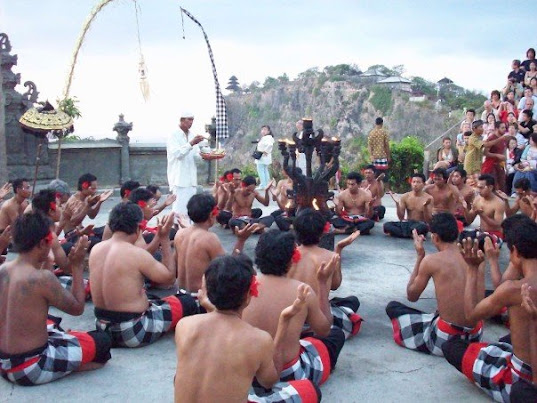 The people are very spiritual.  Every home has a temple, a village, a city, each have a temple.  Even my hotel had a temple area.  Days themselves are known as holy or not.  When you get married or have a funeral you want them to land on holy days.  I was very impressed to see the banana leaf and flowers that represent the prayer of the gods in protecting them and keeping them safe.  This was common to see the prayers over things the people care about.  I have since noticed them in various restaurants owned by religious Hindus.  I did gain a great respect for Hindus based on how I was treated on the island.  I’ve spend a significant time on the island and in working with Hindus, but there was definitely a special strain on the island that was strong. 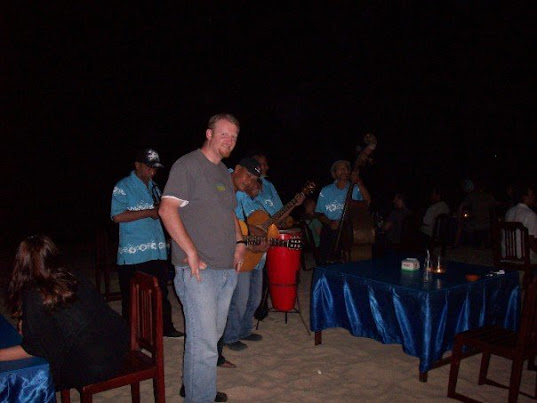 There is so much to tell about the island.  I ended up reading a few books prior to going to Bali.  Likely more preparation than any of my previous trips.  Mostly because I was so fascinated by the people, the colors, the culture. 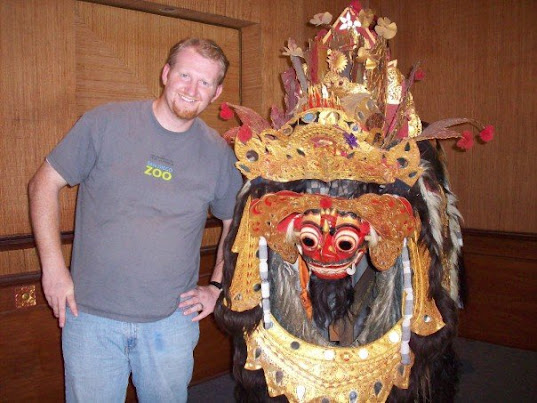 I do recommend going to Bali of course, but when you get there… slow down.  Pick some fresh seafood, walk out onto the beach and listen.  Invite your tour guide to sit with you.  Talk with the locals.  They are an amazing people.  I remember tell my driver and guide… you should come visit America some time.  He replied he would likely never leave the island.  Everything he needs is here.  He understands something about why it is attractive to us to visit him, but despite what he sees on TV, he is ok with watching from afar.  I did meet some Balinese people who work for a cruise line.  I told them how much respect I had for their island.  How it had changed me.  They understood.  They had a lot of pride in Bali and couldn’t wait to get home.

My trip to Bali was one of a few stops.  I will blog about Malaysia in another trip, but it’s of great contrast to Cambodia, one on the same trip.  I blogged about Cambodia and the Khmer Rouge recently.

Enjoy this video which includes clips of my trip including the wedding party in Bali.

Clips from my trip to Bali, Cambodia, and Malaysia

There’s much more I could say about the culture, the fabulous food, the terraced rice patties, the monkey temple (awesome), the massive fruits, the cheap and amazing carvings, the silk, the masks, and jewlery boxes.  Once I bought a jewlery box, and in the next 5 minutes I’d end up with a half dozen more based on what I had paid, and based on the stories I would hear of hardship.  The sincerity.  I wanted to help the people.  You will too.  Lovely people.  I can’t wait to go back.